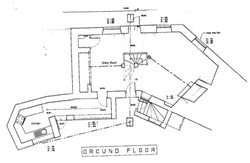 Observant villagers may have noticed over the last few months a few possibly familiar-looking people entering houses in the village and coming out an hour later excitedly talking about loose tenons, parapets and chamfered beams. SAVA has been fortunate in having Paul Clark, a historic buildings expert from the Oxfordshire Buildings Record, join a small group that has been researching house history in Steeple Aston.
So far, we have inspected and produced short reports on about ten houses, kindly made available for an hour or two by owners keen to understand more about their homes.

Things are not always what they seem: some houses show clear evidence that their origins go back perhaps 100 years prior to the date their owners had assumed. For example, it was common in the C18th for houses to be refronted in order to match current fashions for symmetry, larger windows and  often additional bedrooms. Concealed behind the Georgian front elevation though can be a C17th dwelling with construction timber jointed and arranged in a way that had died out 100 years later. Several houses we have seen in the village were originally thatched and had steeper pitches than they now have, but close inspection reveals the story. It can sometimes be linked to changes of ownership in the written records associated with the dwelling.